Smoke (apparently mostly from the Creek Fire south of Yosemite based on satellite photos sent out by NWS Reno) has blanketed Fernley. It was heavy enough to lower temperatures (we got up to only about 35°C/95°F versus 40/104 yesterday) but also put enough smoke into the air that I've had a mild headache most of the day, despite staying mostly indoors and keeping the swamp cooler (which does seem to get some of the smoke out of the air) running. NVEnergy has sent out warning asking people to cut our electrical use and avoid using high-energy appliances this afternoon. Meanwhile, we had a train apparently break down here for a while today, and to do so in a particularly noisy way. 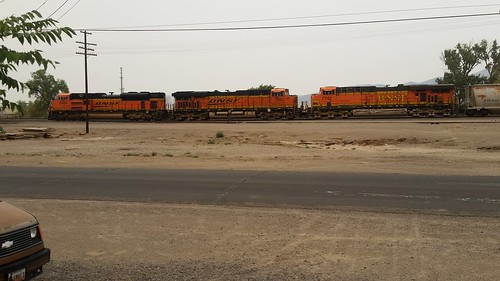 "Big BN" (the mainline BNSF trains that stop at Fernley to drop and collect cars for the "Little BN" switch job that takes/pulls cars to local industries) came through to do its work today. I didn't pay much attention because this is fairly routine, but after a while I finally realized that the locomotives were making a whole lot more noise than usual. I wish I'd gotten a picture when I first realized that there must be something not right, as there were two mainline locomotives on the "house track" but one still sitting on the main line. And the two sitting on the house track were idling as loud as I've ever heard locomotives idle.

After several hours of train rumbling, they eventually got everything put back together and headed for Sparks, where a new crew would relieve them and I suspect that an additional locomotive would have to be added. And that means renting it from Union Pacific, as the nearest BNSF base is Stockton, as I recall.
Collapse