Yesterday's change in the weather cleared the air in Fernley, but it also sent very high winds tearing down the Sierra Nevada, and fanned up the Bear Fire (part of the North Complex of fires in the Plumas National Forest as it merged with another large fire) so that it made a bad fire much worse and started threatening even more places than before, including those personally important to me, starting with my father's home near Oroville. 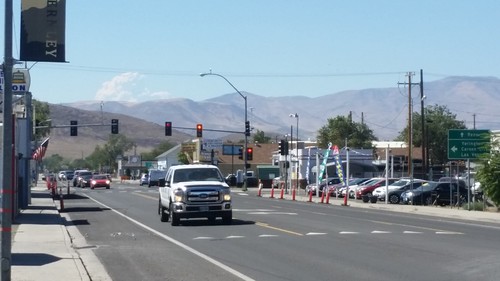 Yesterday as I walked home from the post office, I saw this cloud in the distance and realized that it probably wasn't a cloud, but was instead a smoke plume. I'm pretty sure this is a plume off the Bear Fire when it roared west. Note that the main part of the fire is more than 100 miles (160 km) due west of Fernley, and between me and the fire is not only the mountains you see in the distance here, but the high peaks of the Sierra Nevada that you can't see. The point here is that this is a big smoke plume if I could see it here in Fernley.

Yesterday, I learned that evacuation orders related to the Bear Fire had been issued to the Lake Oroville area and that it includes my father's home. I haven't checked with him yet, but I expect that he will follow the order and has bugged out. Dad is a retired US Forest Service career firefighter, and has installed extensive fire-suppression systems including huge water tanks on his property. However, that was in order for him to be able to tackle small fires breaking out on his own property long enough for the big guns to arrive. It's unlikely to be enough to stop a fire like the Bear Fire, which I read grew yesterday to 250,000 acres (about 390 square miles / 1000 square kilometers). I just hope Dad doesn't lose his home. As of this morning, I heard on the radio that evacuation warnings now extend all the way to Oroville itself, meaning people should be ready to evacuate at any time.

Also under evacuation orders was the string of mountain towns along the Yuba-Butte-Plumas County boundary: La Porte, Strawberry Valley, Clipper Mills, Woodleaf, Forbestown, and most importantly to me, Challenge. One of the original evacuation staging centers was the Ponderosa community center in Brownsville where we held my mother's memorial service; however, as Brownsville is also being threatened, Yuba County closed that site and had people move father away from the fire. I don't think the fire has reached Challenge, and despite no longer having any family or property there, I hope the town survives. Other towns closer to the fire, such as Berry Creek, I understand may be total losses.

Meanwhile, a big fire up in Oregon in the Santiam River canyon has done severe damage to towns like Mill City, and the towns of Lyons and Mehama (where long-time readers of this journal will remember that Lisa lived for many years from the time I first met her until we moved to Fernley). I've seen footage on Facebook showing that Gene's Meat Market, the wonderful specialist meat market across the road from Lisa's parents' property, is burned to the ground. As of yesterday, the Gingerbread House burger barn, a regular stop for people traveling up and down to the Detroit Lake recreation area, still survived.

Lisa's middle two siblings (she's the youngest and her eldest brother lives in New Mexico) inherited her parent's property and split it between them, doing extensive restoration to the old family homestead that some of you will remember Lisa struggled to keep from deteriorating. We do not know what has become of them or the property there in Mehama, although the latest maps I've seen today make it look as though the fire may have been held at the edge of Mehama.

There's nothing I can do about any of this, but it doesn't stop me from worrying.
Collapse